Why Brands Shouldn’t Take Themselves Too Seriously

The year is (almost) 2020. Twitter is more political than MSNBC, the Jonas Brothers have dropped an album, and sweatpants are now high fashion. It’s safe to say that in today’s day and age, we’re constantly teetering on the edge of satire and reality. This is particularly real for brands. As much time and energy as we spend perfectly crafting every word of our messaging, social media posts, and website, there’s a chance it simply won’t resonate, leaving us vulnerable to the brutality of the Twittersphere and beyond.

Your CEO may feel differently, but my point here is simple: Don’t take your brand too seriously. Whether your campaign goes viral in a good or bad way, it’s important to take a step back, understand why, and ultimately laugh at yourself. At the end of the day, your buyers are people — not robots with credit cards — and humor is one of the best ways you can cut through the noise and build a direct connection with them. Marketing and entertainment are blurred lines at this point: It comes down to if your brand chooses to embrace the culture.

For inspiration, let’s dive into a few examples of how fun brands embraced humor and virality (or failed to) in their campaigns.

The brand’s agency struck while the iron was hot and immediately put out a full-page ad in the New York Times featuring a new “Saturday Night Live special edition col-our!”, described as “A rich and good hum-oured hue with subtle hints of bone-dry satire and a lingering aftertaste of charred British beef. It’s not just paint, it’s Farrow & Ball."

While their CEO commented that humor isn’t part of their messaging pillars, “It is still a warm and human brand. Embracing humor is just another facet of that.”

Given I had no idea Farrow & Ball was even a brand prior to this SNL skit, I’d say they fully capitalized on this brand awareness opportunity. Well done, lads.

WARNING: This one is NSFW. Please don’t kill the messenger.

The streaming brand takes double entendres to the next level when it took a popular meme format and applied it to brand social media managers:

The responses were unprecedented, scandalous, and absolutely hilarious. From Kettle Brand chips to Aer Lingus to even Yelp, brands jumped at the opportunity to be NSFW. Here are a few examples:

I'm not sure we want to touch this.

It’s safe to say that for the majority of these brands, sex isn’t anywhere near one of their key messaging pillars. That being said, the virality of this tweet reinforces the importance of timing when leveraging humor in your marketing efforts. These brands didn’t change anything about their product offering, website, or even social media bio — they simply inserted themselves into a relevant conversation and went on with their days.

It goes back to the age-old question: If everyone else jumps off a bridge (or in this case, shares sexual innuendos on their corporate twitter account), do you? (The answer is always yes).

Masse, a crowdsourced shopping platform that harnesses the power of word-of-mouth, instead of paid promotions, helps buyers discover new products ranging from skincare products to coffee machines to cookware.

Now here’s the kicker — I first discovered Masse when a friend sent me a meme from their Instagram that, naturally, was “so me.” Apparently, my reputation for faux-hippie indulgences has caught up to me (although Thrive is really the best mascara out there). 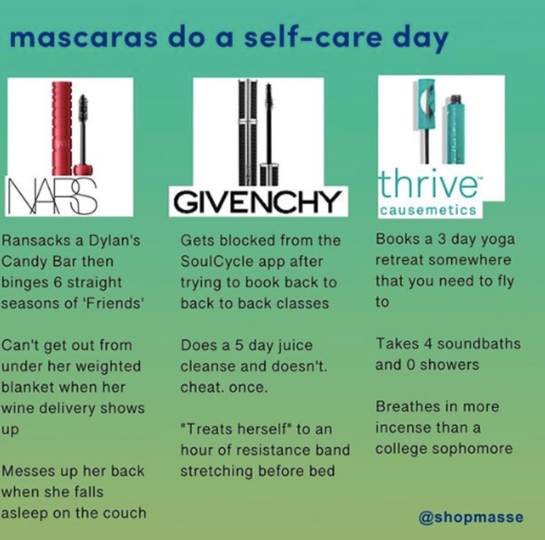 I proceeded to spend the next 15 minutes scrolling through their Instagram, laughing at the “starter packs,” “hierarchy of needs,” and other common meme formats, all tied back to my favorite indulgences: makeup, skincare, and home goods. I found myself sending “Everlane’s Hierarchy of Needs” to my roommate and “conditioners on Slack” to my work wife, and suddenly I realized I’d become an influencer for Masse.

Jokes aside, Masse creates shareable content that has little to do with their actual platform but instead directly relates to their buyers. The key component in the humor behind their social media marketing is simple: self-awareness. By understanding who their target audience is, Masse has capitalized on the “on brand” nature of consumers.

You’ve likely seen the controversial Peloton ad that was criticized for being sexist, dystopian, and responsible for riling up a storm on Twitter. Many even went as far as to call the commercial a Black Mirror episode, and Peloton’s stock fell 9% after all the online drama. In my opinion, the biggest miss was Peloton’s failure to capitalize on all the publicity and at least attempt to make light of the situation, instead of simply expressing their “disappointment” over the “misinterpretation”.

Luckily, the brilliant and perfect Ryan Reynolds and Aviation Gin capitalized on the ad. They included the “Peloton wife” Monica Ruiz in their latest commercial aptly titled, “The Gift That Doesn’t Give Back.”

The ad itself is simple and shows Ruiz downing a martini with friends, coping with the embarrassment of her Peloton experience.  While gin and fitness are opposites on the health scale, Reynolds and his team recognized an opportunity to poke fun at Peloton while also, ultimately, building their own brand awareness and association. A key learning from this is simple: Focus on your own brand, not others. Regardless of what your competitors (or in this case, nearly completely unrelated other company) are doing, it’s important for brands to focus on what makes them relevant, unique, and, in this case, straight up funny.

If you’ve had internet access these past few months, you’ve likely heard of the fried chicken sandwich Twitter war Popeyes started with Chick-fil-A upon launch of their new menu item. 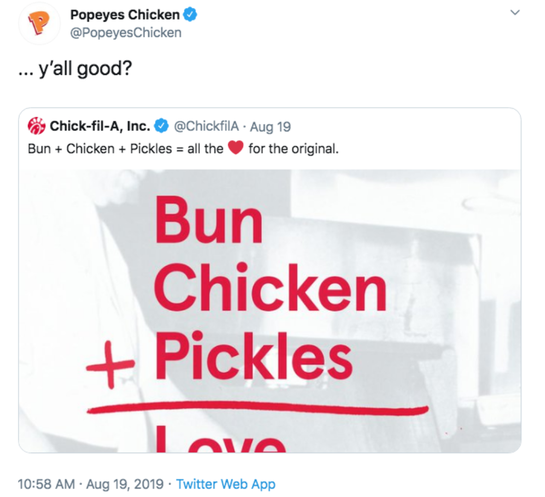 The brands went off. Wendy’s got involved. The Twittersphere pledged allegiances. Harry Styles couldn’t get a sandwich. Memes were made. People got stabbed. Bloomberg, The New York Times, NBC, and various media outlets covered the stories. Popeyes’ PR and social media strategy successfully made a fried chicken sandwich go viral.

According to Bloomberg, Popeyes expected to sell 60 sandwiches a day — in reality, once the sandwich went to market the numbers were closer to 1,000 a day. Lines wrapped around many city blocks, some sandwiches were sold on eBay, and they even offered a BYOB (bring your own bun) special once they officially ran out.

Popeyes simply added a new item to their menu — but their witty approach, willingness to be vulnerable to their competitors, and “go with the flow” mentality caused their go-to-market strategy for a fried chicken sandwich to become the viral sensation of the year...Louisiana fast.

While these examples are definitely entertaining, I hope they also shed light on ways you can take a potential PR nightmare and capitalize on an opportunity to directly connect with customers and build your brand. My TL;DR of all this is:

While brands should embrace humor, they sometimes cross the line into offensive territory. Check out these 8 marketing mishaps to avoid.